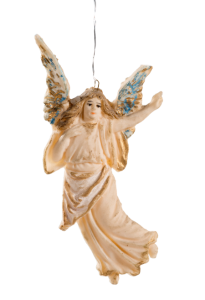 Tragacanth is a white, tasteless and odourless resin mass that has been used since Antiquity. The resin is extracted among other things from the boxthorn bush, which is indigenous to India, Iran and the Mediterranean countries. It is turned into a modelling material by mixing it with rosewater, egg white, sugar and starch. Tragacanth reached our confectioners via the Italian trading port of Venice in the Middle Ages and was an important component of the art of confectionery in the 16th, 17th and 18th century as so-called “Zuckerzeug” (sugarcraft). Tragacanth also appears under other names, such as “ausgelaufenes Zuckerzeug” (fluid sugar) in “Zuckerbossierer” cookbooks from the 17th and 18th century. Besides several tragacanth producers in the Swabian region of Southern Germany, it was mainly the Viennese and Berlin masters who were famous for their Christmas tree products during the Biedermeier era (1815-1848).

Tragacanth is an outstanding modelling material, whose surface quality is less porous than standard dough types. As a result, the deeper motifs of wooden models could be moulded accurately and decorated with fine painting after drying; sometimes the tragacanth figures were coated with gum arabic, which gave the light material an almost porcelain-like look.