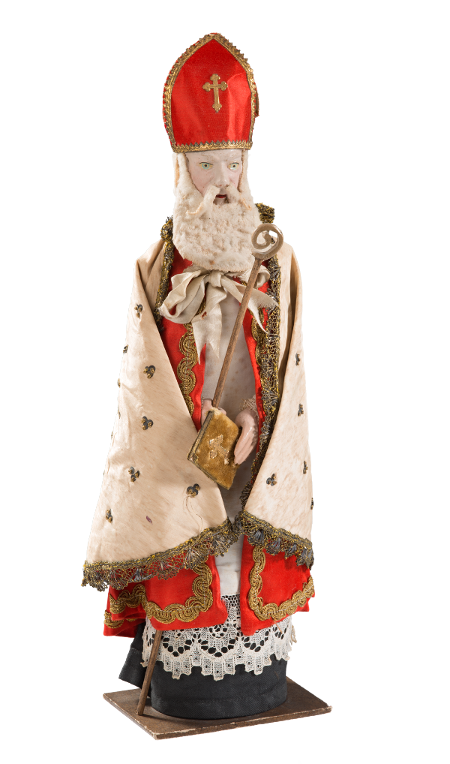 St. Nicholas’ Day was the highlight of Christmas in private families until the second half of the 16th century.

Nicholas was born in Patara, a Turkish port in the former province of Lycia on the Ionian Sea and was bishop of the city of Myra in Lycia. He died in 342 AD or 347 AD. A great veneration of saints starts in the Eastern church in the 6th century and spread throughout the Orient and Occident. The Nicholas cult was not widely established in the West until the 10th century onwards when the veneration of Saint Nicholas also took a foothold in Germany, spreading out from the Rhineland. However, it was the holy crusades, Nicholas pilgrimages and his patronage as a holy helper that established his universal veneration from the 11th century, through which a widespread custom also developed.

It is difficult to understand Saint Nicholas’ life as the hagiography combines and mixes historical details from the life of other saints of the same name with his character. For example, with that of Abbot Nicholas from the Abbey of Sion near Myra, the later bishop of Pinara, who died on 10.12.564 AD. Some of Saint Nicholas’ patronages, as well as certain customs, are associated with episodes from the many legends entwined with his life. 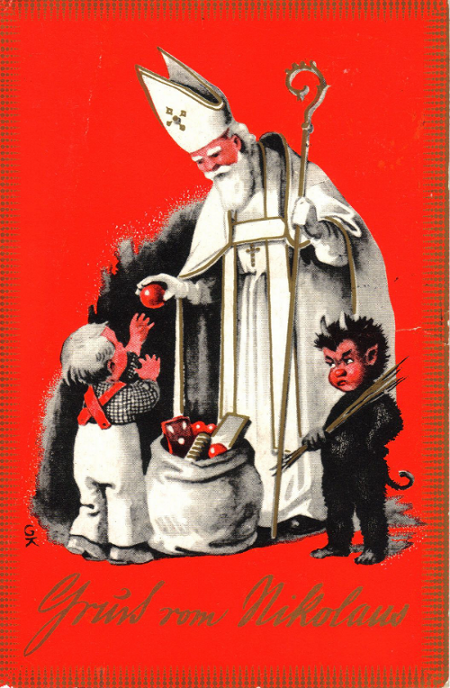 His “office” as the gift bringer for children also results from his life story: he is supposed to have brought three murdered boys back to life again, which is why he became a general friend and protector of all children. He is also supposed to have protected three virgins from shame by sending anonymous cash gifts. That makes him a gift giver.

As a result he became the first gift bringer during the Christmas season, long before the Christ Child or in fact Santa Claus appeared.

It is the custom that he gives gifts to children on his saint’s day, December 6. In doing so the gift bringer always appeared in bishop’s attire with a mitre and crosier (staff), the colour of his garments is purple or white with gold. One of his attributes, a book, is often used as the “book of knowledge” when questioning children. He usually has a sack to transport the gifts, which an assistant, e.g. “Pelznickel”, carries. The precursors to this custom of giving gifts can be found in Medieval bishops’ plays where the legends of Nicholas are re-enacted. These developed first of all into the custom that a student dressed as Saint Nicholas stopped at the Medieval monastery schools as the children’s bishop (episcopus puerorum) before Christmas, questioned his fellow students and then gave them apples, nuts and sweets as gifts. In recent times the gift bringer is portrayed by adults. 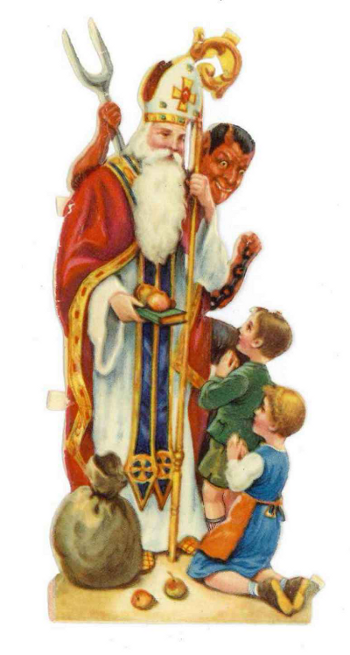 Although the reformation suppressed the importance of the saint’s day and the associated gift giving custom was “shifted” to Christmas, “the little gift giving ceremony” is still practised today in memory of the saint in predominantly Catholic areas. The custom of placing empty shoes on the doorstep on the evening before St. Nicholas Day, which are “secretly filled by the saint” is also very popular in Germany. This is also how the (red) boot became very popular as the item to be filled with Nicholas’ gifts.

In association with gift giving there is also a version known in Germany, which, however, is primarily practised in countries of Anglo-Saxon origin. The basis for this is the legend where the saint drops cash gifts for the three virgins from the roof into the room, making you instantly think of a chimney. That is why children hang stockings by the fireplace on Christmas Eve in anticipation of catching the “falling” gifts.

The name of a cookie that is extremely popular in particular around Christmas and which depicts the saint, often riding on a donkey or horse, comes from the saint being called the “episcopus speculator”: Spekulatius.