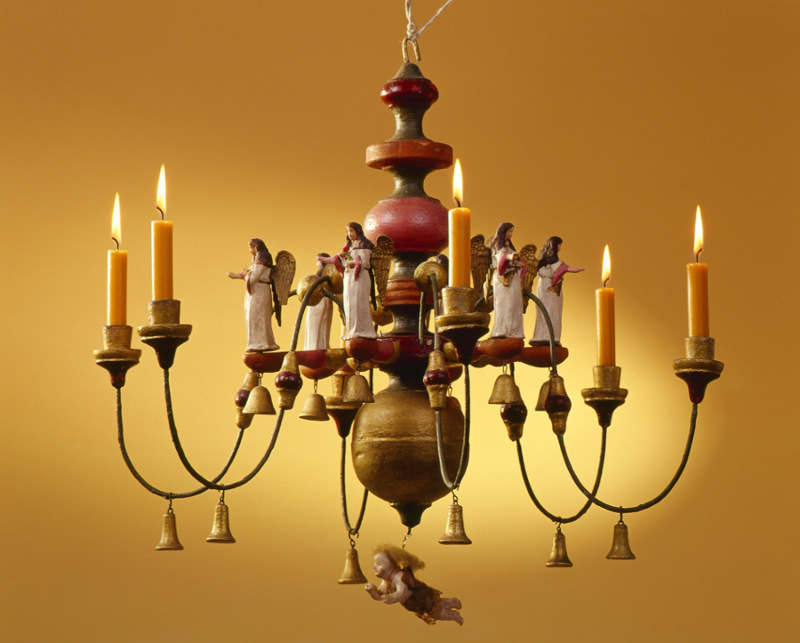 The ceiling lights, which are early examples of Erzgebirge mining art, were already part of the Christmas decorations usually made by craftsmen for use in their own home in the first half of the 19th century.

When and where exactly the Christmas ceiling lights originated from is unknown. One theory bases the origin in mining pit timber, which with arms inserted on the sides fitted with little rape oil lamps, was used as lighting underground. The pit timber was also hung up on Christmas Eve in the mines, which is why it probably entered into the Christmas tradition. One second theory assumes that the miner copied the magnificent crystal and brass lights to be found in churches and stately homes for his festive lighting at home out of the cheaper material timber. Ceiling lights appear in two basic types: as candelabras and chandeliers. Their arms can be very easily artistically decorated or designed in detailed fretwork and little figures can be added to stand on the arms, or so-called “Bammeln”, ornaments which hang down.
The candelabra is also called a Spinnenleuchter (spider candelabra) or Bergspinne (mining spider) in German. It consists of a central spindle turned on a lathe into which candelabra arms are inserted on one or several tiers. Candelabras with s-shaped curved arms were produced in particular in the Seiffen region.

With chandeliers several wooden circles of different diameter are arranged around a central spindle or the light arms of one tier are connected together using wooden or glass bead chains. 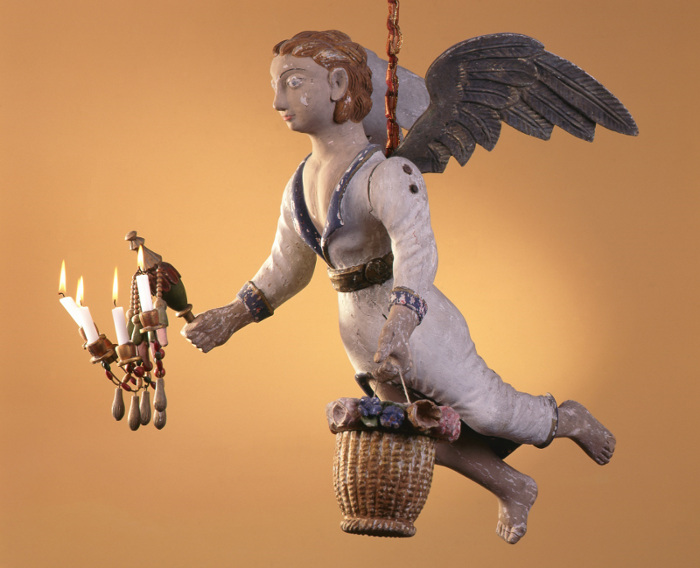 One special type is the turning chandelier. It has both the characteristics of a candelabra and chandelier but also has a propeller. It is therefore also called a hanging pyramid or turning spider. With some models the entire pendant light is surrounded by a frame construction.

One special shape with Christmas lighting hanging from the ceiling is the hanging angel. It is an angel figure carved out of wood that holds candles or candelabra in its hands. It originates in the ecclesiastical sector where the angel is considered to be the bearer of the holy light and the angel of annunciation bringing the Christmas message in nativity plays. In its carved form it was often lowered from the church ceiling for better illustration, especially in the 17th and the first half of the 18th century. Finally it was hung up in many families’ private homes instead of the Christmas candelabra. One custom, which has been handed down through the generations, says that the father always made this kind of floating angel for his son.